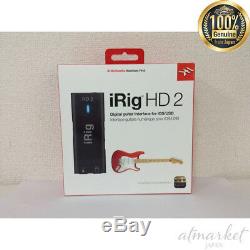 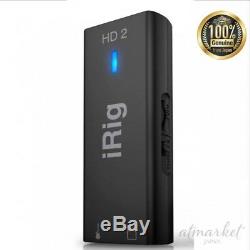 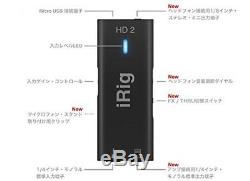 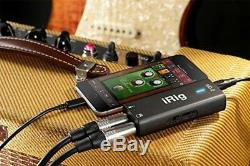 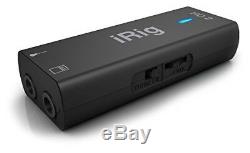 IK Multimedia iRig HD 2 High sound quality guitar / base interface From JAPAN. Our products are 100% authentic. IRig HD 2 is a successor to iRig HD, a digital audio interface for guitar / bass that you can use with iPhone, iPad, iPod touch and Mac / PC. Headphone output terminal that can adjust the monitor volume, 1/4 inch standard out terminal for amplifier connection, effects as it is, while keeping the basic specification with high quality A / D converter compatible with 24 bit / 96 kHz compatible pocket size / FX / THRU switch that can switch the dry sound, and many new functions are installed and reborn.

Full version of AmpliTube is also included! Clear sound with 24-bit / 96 kHz high resolution A / D conversion The iRig HD 2 is equipped with a high-quality 24-bit A / D converter that supports sample rates up to 96 kHz that are not affected by noise and crosstalk. You can input line level audio such as guitar, bass, synthesizer etc on iOS device such as iPhone, iPad, iPod touch or Mac / PC computer with clear sound quality like crystal.

In the iRig HD 2 equipped with a high-quality preamplifier, unnecessary coloring etc. Is not done to the sound to be inputted. Even the difference in model, the difference in pickups and strings, even the subtle nuance differences of the sound the guitar inherently possesses, can be fully and clearly captured. Equipped with headphone jack, ideal for iPhone 7 The iRig HD 2 has a 1/8-inch (3.5 mm) headphone output terminal that can adjust the monitor volume.

You will be able to use it conveniently for practice, rehearsal, monitoring of recordings. Also with the latest iPhone 7 with headphone jacks discontinued, you can monitor the guitar / bass sound with headphones or output it to an external PA system.

For example, you can use the iOS mobile device as a tuner or recorder, and use effects such as physically connected stomp effects or processing with an amplifier. Full version of AmpliTube is included The iRig HD 2 comes with a download version of the popular No.

1 guitar, effects, amp, modeling, application / software, AmpliTube, including AmpliTube for iOS, AmpliTube 4 for Mac / PC. After purchasing, you can use it immediately after taking out from the box. AmpliTube FREE for iPhone / iPad which can be downloaded free from Apple App Store Full version function can be used by canceling function restriction. In addition, with the Mac / PC version AmpliTube Custom Shop function, for iOS version you can add gear models by in-app billing. We have prestigious gear models from famous brands such as Fender®, Orange®, MESA / Boogie®, Ampeg®, T-Rex®, Fulltone®, Seymour Duncan®, and Jimi Hendrix and Slash signature titles I will.

Guitarist / bassist spoilage equipment can further enhance setup. Both performance and recording make it easier to use High-quality 24-bit / 96 kHz mobile digital interface compatible with iPhone, iPad, iPod touch and Mac / PC iRig HD 2 is a successor to iRig HD, a highly popular guitar / bass digital audio interface. Also included is the full version of AmpliTube that you can use with Mac / PC computers and iOS devices. Please note: Due to the iOS and AmpliTube for iOS specifications at the moment, when using iRig HD 2, the AmpliTube for iOS sound will not be output from the internal speaker of the iPhone / iPad / iPod touch.

Because it has a 1/8 inch (3.5 mm) headphone output terminal that can adjust the monitor volume. Of course, other models can be used conveniently, such as practice, rehearsal, monitoring of recordings, connection to an external PA system, etc. The iRig HD 2 has a built-in high resolution headphone amplifier. It is also possible to connect this headphone jack to powered monitor speakers like iLoud Micro Monitor, mixer, PA system and output hyper realistic sound processed by AmpliTube with high-quality stereo sound It is possible.

24-bit / 96 kHz A / D conversion with low noise, high resolution that can withstand professional use The iRig HD 2 is equipped with a high-quality 24-bit A / D converter that supports sample rates up to 96 kHz that are not affected by noise and crosstalk. You can grasp clearly the difference of nuances of the sound of the sound that the guitar inherently has, such as the difference in models, the difference between pickups and strings.

The iRig HD 2 was equipped with a new output connection terminal for the amplifier connection. Also equipped with FX / THRU changeover switch, it is also possible to switch between effect sound processed by AmpliTube application etc.

And dry bypass · sound to play. You can freely switch between setups, such as practice at home, stage, studio, etc. Depending on time and circumstances. In addition, a convenient magic tape for attaching to the microphone stand and a "clip" for attaching detachable tape are included, and usability on the stage is improved. By combining with iKlip Xpand and iKlip Xpand Mini, which are compatible with a wide range of smart phones and tablets, you can attach them to the microphone stand to further improve the operability and visibility on the stage.

Although compact, it corresponds to 24bit / 96kHz, high-quality recording is possible. Also equipped with a headphone output terminal with adjustable monitor volume, 1/4 inch standard out terminal for amplifier connection. It is also attractive that the popular software AmpliTube 4 for Mac / PC of 17,280 yen and AmpliTube for iOS full version of 2,400 yen are included. Pocket-sized guitar / bass audio interface iOS, Mac / PC compatible Lightning cable and USB cable included 24-bit A / D conversion up to 96 kHz Ideal for iPhone 7.

1/8 headphone jack and standard output terminal for amplifier. Five Promises of Our Shop. We are the careful packing. We can try to find other Japanese products if you wish. We highly recommend using EMS service for safety and smoothly.

We will find any item for you. The item "IK Multimedia iRig HD 2 High sound quality guitar / base interface From JAPAN" is in sale since Saturday, July 21, 2018.

This item is in the category "Musical Instruments & Gear\Pro Audio Equipment\Audio/MIDI Interfaces". The seller is "japan_atmarket" and is located in Japan. This item can be shipped worldwide.