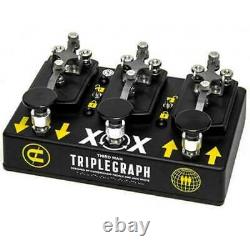 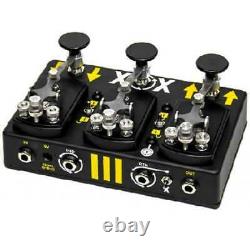 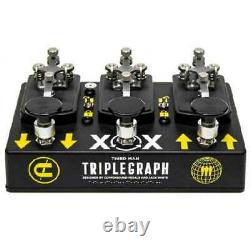 If you want to play only the octave sound, use the center switch as a kill switch and step on it at the same time as the octave to cut the original sound. Since both octave switches can be selected from momentary and latch, it is possible to play one phrase up octave like Jack White. · "KILL" mode The central switch acts as a momentary original sound kill switch.

Even if the direct sound is cut, if any octave is turned on, only the pitch-shifted sound will be output. · "AUXILIARY" mode The switch in the center acts as a momentary FX (effect) loop.

Direct sound is output through the effector connected to the SEND / RETURN terminal. Again, the octave sound is parallel to the octave, so the octave sound does not go through the FX (effect) loop. · Unique "Morse code switch" The foot switch, made of stainless steel and aluminum, is originally in the shape of a Morse code switch that is pushed by hand, but has the durability to be stepped on by foot. Like Jack White, it can be switched at your feet as a guitar effector, or it can be placed on a table and used for effect processing such as modular synths. ·Example of use If you know Jack White's play, you can imagine how to use it in one shot. If you're a football lover, remember "Seven Nation Army" from the White Stripes era, where the main riff sounds unison down an octave on a single guitar, and the violent part that hits the rust overlaps the distorted sound with an octave up. Listen to the sound and you'll know how it's used. If you like movies, you can easily see the octave up in the interlude of the theme song "Another Way To Die" (Alicia Keys & Jack White) of "007 Skyfall" and the crushing fuzz sound.

Of course, it's the best weapon for making the sound you're aiming for, and by using it in a temporary phrase like Jack, you're worried that using octave fuzz is good for single notes, but it's crushed by chords... It's also a solution. ¦ Product features · Collaboration between CopperSound Pedals and Jack White -Equipped with octave down, octave up, kill switch / FX loop functions · Zero latency tracking by high-speed processing DSP · Each octave can be set independently for latch / momentary. · Custom-designed switch designed based on Morse code switch · Step on / push by hand...

A switch designed for all situations ¦ Specifications Power supply: 9V (2.1mm x 5.5mm terminal) / center minus / 250mA or more If you try to operate at less than 250mA, only the bypass sound will be heard. We do not mark merchandise values below value or mark items as "gifts" - US and International government regulations prohibit such behavior. This item is in the category "Musical Instruments & Gear\Guitars & Basses\Parts & Accessories\Effects Pedals\Other Guitar Effects Pedals".

The seller is "happy1lucky1" and is located in this country: JP. This item can be shipped to North, South, or Latin America, all countries in continental Asia, Germany, France, Australia.